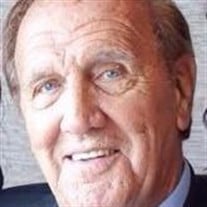 Vincent A. “Bummer” Trombetta, Sr. Aliquippa, PA Vincent A. Trombetta, Sr. of Aliquippa passed away unexpectedly on May 7, 2017 at his home surrounded by his loving wife and children. He will now be reunited with loved ones as he watches over his family and friends from above. Born August 12, 1937, in Aliquippa, the son of the late Michael and Frances (Nolfi) Trombetta. He was a retired airline mechanic with US Air. His greatest job, the one he loved the most, was raising his four children with his wife Helen. He greatly enjoyed a house filled with family for Sunday dinners and Holidays. Vince is a member of St. Titus Roman Catholic Church in Aliquippa, PA and the Saint Anthony Congregation. In addition to his parents, he was preceded in death by his sister Diane, his sister and brother-in-law Connie and Louis LaPietra, his sister-in-law Josephine Matesic and brother-in-law John Tuffie, along with two nieces, Lorraine Matesic and Trysha Roberts, and a nephew Milton Rheem. Continuing on his love and commitment to family are his wife of 57 years Helen M. (Olach) Trombetta, His daughters Lisa Trombetta and Rebecca Trombetta, His sons Vincent (Elizabeth) Trombetta, Jr. and Christopher (Cynthia) Trombetta; six grandchildren that he so proudly cherished in Taylor, Vanessa, Jordan, Gabriella, Michael and Gianna, and many cousins, nieces, nephews, extended family members and close friends. Vince was proud of being a member of a local musical group known as The Sentimentals. He was an avid golfer and sports fan whose passion for sports came from following the Pittsburgh Steelers and the Aliquippa Quips. He was actively involved with the Beaver County Democratic Committee, Beaver/Lawrence Central Labor Council, and the IAMAW Union – Local Lodge 1976. Vince was a life member of Barney’s Tavern and enjoyed many years playing in their softball and golf leagues. He also played in the Celtics golf league and was a member of a host of social clubs around the Aliquippa area. Friends will be received on Thursday, May 11, 2017 from 2:00 p.m. through 8:00 p.m. at the Anthony Mastrofrancesco Funeral Home, 2026 McMinn Street, Aliquippa, PA 15001. Departing prayers will be held on Friday, May 12, 2017 at 9:30 a.m. followed by a Mass of Christian burial at 10:00 a.m. at St. Titus Roman Catholic Church with Rev. Fr. Howard Campbell officiating. Entombment will follow at Mt. Olivet Cemetery.

Vincent A. &#8220;Bummer&#8221; Trombetta, Sr. Aliquippa, PA Vincent A. Trombetta, Sr. of Aliquippa passed away unexpectedly on May 7, 2017 at his home surrounded by his loving wife and children. He will now be reunited with loved ones as... View Obituary & Service Information

The family of Vincent Anthony Trombetta Sr. created this Life Tributes page to make it easy to share your memories.

Send flowers to the Trombetta family.