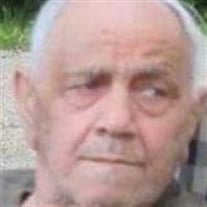 Vincent N. Morocco, 87, of Center Township was joyfully reunited with his wife on March 2, 2017.He was born on October 29, 1929, in Aliquippa, a son of the late Dominic and Rosa Morocco. In addition to his parents, he was preceded in death by his beloved wife Patricia (Suttelle) Morocco, and his siblings Katheryn Agresti, Louisa Churovia, and Richard Morocco. Vincent was a member of St. Catherine of Siena Roman Catholic Church. He was a veteran of the United States Army during the Korean Conflict and was awarded a purple heart. Vincent had a strong work ethic. He worked as a milk man for the former Logstown Dairy and Smiley’s Tire Shop. He retired from J&L Steelworks where he worked in the Seamless Tube Department. Later, Vincent was also self-employed doing concrete work leaving his stamp all over the county. In his spare time he enjoyed going to his camp. He was an avid card player and did not mind taking someone’s money in a game of poker or pool. His greatest passion was his family. Vincent would lovingly cook delicious homemade meals and desserts for his family to enjoy. He was happiest when they were all together. Vincent is survived by his children, Victoria and Richard Capone, Branell and Gary Lowery, Vincent and Renee Morocco, Carla and Daniel Kennedy, and Greg and Debbie Morocco. His grandchildren, Tina Marie and Gregory Spragg, Michael and Tiffany D’Jovin, Rhiannon and James Munroe, Bradley Lowery, Nicholas Morocco, Brian Kennedy and Holly Gunvaldson, Courtney and Ryan Koch, Alyssa Morocco and Curt Beebe, Kara and Jordan Overton. Also, his great grandchildren, Anthony, Michael, and June D’Jovin, Dominick and Mia Koch, Ryleigh and James III Munroe, Judah Overton, and Anna Belle Beebe. Vincent is also survived by a sister-in-law and brother-in-law: Bernice and Chuck Cheuvront and many loving nieces and nephews. Visitation will be Sunday from 2-4 and 6-8 p.m. in the Anthony Mastrofrancesco Funeral Home Inc. 2026 McMinn Street, Aliquippa, 15001 724-375-0496. Departing prayers will begin at 8:45 a.m. in the funeral home followed by a Mass of Christian burial at 9:30 a.m. at St. Catherine of Siena Church with Father Lou Valone officiating. Entombment will follow at Woodlawn Cemetery. The Beaver County Special Unit will conduct military honors at the cemetery. A special tribute by Glen Angus playing bagpipes will follow the military service at the cemetery

Vincent N. Morocco, 87, of Center Township was joyfully reunited with his wife on March 2, 2017.He was born on October 29, 1929, in Aliquippa, a son of the late Dominic and Rosa Morocco. In addition to his parents, he was preceded in death by... View Obituary & Service Information

The family of Vincent N. Morocco created this Life Tributes page to make it easy to share your memories.

Send flowers to the Morocco family.