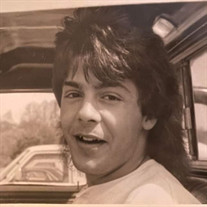 Samuel Polojac, Jr. 51, of Aliquippa passed away January 3, 2022, after a brief illness. He was born February 24, 1970, in Sewickley, PA and is the son of Linda (Colangelo) Polojac and the late Samuel Polojac Sr. Sam was also preceded in death by three uncles: Rody and Robert Polojac, Richard Riccitelli and his father-in-law Franco Fratangeli Sr. Sam was the owner and operator of Sam’s Metal Works. He enjoyed doing many things and took great pride in his work. From welding and fabricating in the shop to building the largest of items to the smallest, Sam always put his heart and soul into each project. Sam enjoyed the time he spent working on cars with family and friends no matter how difficult the job was. Sam was a devoted father and loved spending time with his children and grandchildren, always putting their needs above his own. Sam was proud that he was able to share his skills and knowledge with his children enabling them to be prepared for their futures. He was the kind of man people relied on for guidance as he was always willing to help those in need. In addition to his mother, Linda Polojac, Sam is survived by his beloved wife of 31 years: Marina (Fratangeli) Polojac, three children: Devin and Shaun Finney, Ryan Polojac, Lindsey and Ty Miller. Four grandchildren: Stephin, Austin, Rhowan and Autumn. A sister, Denise and Tom Chenoweth, Two brothers: Mark and Michael Polojac, his nieces and nephews: David (Diana), Alan, Jacob, Zachary, Allie, Evan and Beau. Sam is also survived by his mother-in-law: Antoinette Fratangeli and a brother-in-law: Franco Fratangeli Jr. (Ann) and his beloved fur babies, Olive and Bailey, who he loved so much. Visitation will be Sunday from 1pm until time of Pomen (Blessing Service) at 4:30 pm in the Anthony Mastrofrancesco Funeral Home Inc. 2026 McMinn Street, Aliquippa, PA 15001. A service will be held Monday at 1:00 pm at St. Elijah Serbian Orthodox Church with the Very Reverend Father Branislav Golic. (Please meet at the church) Interment will follow at Mt. Olivet Cemetery. Sam can be summed up in one phrase “A Jack of all trades is a master of none, but oftentimes better than a master of one.” We love you and will miss you!

Samuel Polojac, Jr. 51, of Aliquippa passed away January 3, 2022, after a brief illness. He was born February 24, 1970, in Sewickley, PA and is the son of Linda (Colangelo) Polojac and the late Samuel Polojac Sr. Sam was also preceded in death... View Obituary & Service Information

The family of Samuel Polojac Jr. created this Life Tributes page to make it easy to share your memories.

Send flowers to the Polojac family.