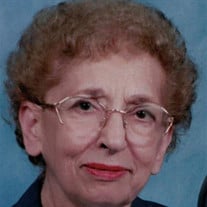 Rose Ann “Dodie” DiCioccio 87, of Center Twp. passed away from the loving arms of her family to the waiting arms of her beloved husband on March 2, 2017. She was born May 28, 1929 in Aliquippa and was the daughter of the late Pasquale and Theresa (Sario) D’Ottavio. In addition to her parents she was preceded in death by her beloved husband Americo “Mac” DiCioccio, a brother and sister-in-law: Virgil and Janet D’Ottavio, a sister and brother-in-law: Josephine and David McKenna, three brothers-in-law: Pasquale “Pat” DiCioccio, John and Ann DiCioccio, a sister-in-law and brother-in-law: Italia and Gilbert Cianfaglione Rose was a member of St. Frances Cabrini Church and the Confraternity of Christian Mothers. She was a loving mother and grandmother to her children and grandchildren who her survive her: Gary DiCioccio and Judy Barilaro. Three beloved grandsons: Americo “Jake”, Ben and Noah Barilaro, a brother in law and sisters-in-law: William “Bill” and Carla DiCioccio and Lillian DiCioccio, and numerous nieces and nephews. Also survived by life- long friend Emelio “Emmy” D’Antonio and his wife Lillian who preceded Rose in death. Rose had a special relationship with her card club friends. Their friendship was steadfast and true throughout the years. Friends and family will be received on Saturday from 9:00 a.m. in the Anthony Mastrofrancesco Funeral Home Inc. 2026 McMinn Street, Aliquippa 15001 until time of Mass of Christian burial at 10:00 a.m. at St. Frances Cabrini Church with Father Martin Bartel O.S.B. officiating. Interment at Mt. Olivet Cemetery will private. O.S.B. officiating. The family would like to thank Andrea, Darlene, Erica, Pam, Misty, Michelle and Ansley, for the love and compassion that was extended to Rose. Your kindness will never be forgotten. A special thank you to the staff at Trinity Oaks and Katera’s Kove. A heartfelt thank you to Allegheny Health Network Hospice for making Rose’s final months very peaceful. “Dio benedica East Drive”

Rose Ann &#8220;Dodie&#8221; DiCioccio 87, of Center Twp. passed away from the loving arms of her family to the waiting arms of her beloved husband on March 2, 2017. She was born May 28, 1929 in Aliquippa and was the daughter of the late Pasquale... View Obituary & Service Information

The family of Rose Ann "Dodie" DiCioccio created this Life Tributes page to make it easy to share your memories.

Rose Ann “Dodie” DiCioccio 87, of Center Twp. passed away from...

Send flowers to the DiCioccio family.