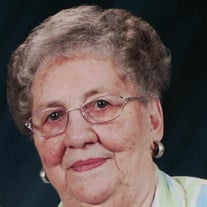 Rita A. Wilkison 91 a resident of Aliquippa for 66 years died with her family surrounding her on April 17, 2017. Born June 18, 1925 in Duncansville, PA a daughter of the late Herman and Amelia Neugebauer. In addition to her parents she was preceded in death by her loving husband Galen, two sons: Larry and Jeffrey, a great-grandson Dakota Cofer, two brothers: Herman and Thomas Neugebauer and two brothers- in- law: Bill Burk and Bill Wilkison. Rita was a homemaker. She was a member of St. Titus Roman Catholic Church, Aliquippa. Rita was also a member of the Catholic Daughters of America, Confraternity of Christian Mothers, a social member of Queens of Columbus, Fab 50 group at St. Francis Cabrini, Our Lady of Mt. Carmel and St. Anthony congregation. She also volunteered at Aliquippa hospital and delivered Meals on Wheels. Rita enjoyed crocheting, bingo, card playing and gambling at Mountaineer Park. She was an avid Steelers, Pirates and Aliquippa High School Football fan. Surviving Rita are a devoted son and daughter- in- law John and Lucy Wilkison with whom she made her home in Center Twp. A daughter in law, Marilyn Wilkison and husband Robert Boord of Center Twp. Grandchildren Amy(Pete) Mogyordy, Westlake, OH, John Wilkison(Amy Stapleton), Center Twp, Bethie Cofer, and Kara(Joseph) Beaver. Great-Grandchildren Madeline, John Paul, and Olivia Mogyordy, Gabriel Cofer, Osheonna and Lexis ,Beaver, and Payton McWilliams. A sister Catherine Burk, Lancaster, PA. two sisters- in- law: Barbara Neugebauer and Bernice Wilkison, and numerous nieces and nephews. Visitation will be Friday from 2-4 & -7-9 in the Anthony Mastrofrancesco Funeral Home Inc. 2026 McMinn Street, Aliquippa. Departing prayers will begin at 9:00 a.m. Saturday morning in the funeral home followed by a Mass of Christian burial at 9:30 a.m. in St. Titus Church with Father Howard Campbell officiating. Interment will follow at Mt. Olivet Cemetery.

Rita A. Wilkison 91 a resident of Aliquippa for 66 years died with her family surrounding her on April 17, 2017. Born June 18, 1925 in Duncansville, PA a daughter of the late Herman and Amelia Neugebauer. In addition to her parents she was... View Obituary & Service Information

The family of Rita A. Wilkison created this Life Tributes page to make it easy to share your memories.

Rita A. Wilkison 91 a resident of Aliquippa for 66 years died...

Send flowers to the Wilkison family.