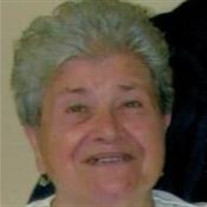 Rina Fratangeli, 84, of Aliquippa, passed away Thursday, October 31, 2019, and was joyfully reunited with her beloved husband and son when passed from the arms of her loving family into their embrace. She was born March 8, 1935, in Frosinone, Italy, and was the daughter of the late Loretto and Guiseppena Antonucci. In addition to her parents, she was preceded in death five months ago by her husband, Umberto Fratangeli, and a cherished son, Robert Fratangeli. Rina was also preceded in death by a sister-in-law, Candidina Antonucci; two brothers-in-law, Franco Savo and Loretto Carfagna; four brothers-in-law and a sister-in-law, Frank Fratangeli, Mario and Guilia Fratangeli, Augusto Fratangeli, and Sam Antonucci. Rina was a member of St. Titus Roman Catholic Church. She worked at Paul's Bakery and Aliquippa Hospital from where she retired. Surviving Rina are three children, Nick Fratangeli, John Fratangeli and Sandy Timmons, Lorena and Anthony DiNunno; nine grandchildren, David and Julia Fratangeli, Jennifer and Damien Tortorice, Karina Fratangeli, Vincenzo and Julie, Kayla and her fiancé Ben, Brianna and Gabriela DiNunno, and Darby Paul; and four great-grandchildren, Tyler, Rayne, Nathan, and Lincoln. In addition to her children and grandchildren, she is survived by a sister, Memma Savo, and two brothers and a sister-in-law, Gino Antonucci, and Antonio and Francesca Antonucci. Rina is also survived by five brothers-in-law and nine sisters-in-law, Domenic and Felicetta Fratangeli, Filomena Antonucci, Remo and Maria Fratangeli, John and Vicki Fratangeli, Tony and Anna Fratangeli, Phillip and Sue Fratangeli, Margarita Fratangeli, and Antionette Fratangeli, and many loving nieces and nephews. The family would like to thank VITAS Hospice for the wonderful care that was extended to Rina by Char, Shannon, Amy and the 24 hour care nurses. Our appreciation is also extended to Linda who was there for both of our parents until their last days and Dyan, who became a part of our family through the loving care she gave to Umberto and Rina when their health had begun to fail. The family also wishes to express their gratitude to Marina and Trish for everything they did and the constant love they gave to Rina. Her sons and granddaughters Kayla, Brianna and Gabriela for being there to help when it was needed most and to Tony for your patience and understanding. Visitation will be Monday from 4 to 8 p.m. in the ANTHONY MASTROFRANCESCO FUNERAL HOME INC., 2026 McMinn St., Aliquippa, 724-375-0496. A service will be held in the funeral home on Tuesday at 10:30 a.m. with Pastor Kevin Dragonac. Entombment will follow at Resurrection Cemetery.

Rina Fratangeli, 84, of Aliquippa, passed away Thursday, October 31, 2019, and was joyfully reunited with her beloved husband and son when passed from the arms of her loving family into their embrace. She was born March 8, 1935, in Frosinone,... View Obituary & Service Information

The family of Rina (Antonucci) Fratangeli created this Life Tributes page to make it easy to share your memories.

Send flowers to the Fratangeli family.