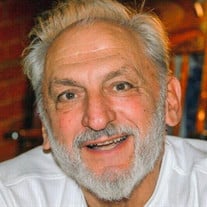 Raymond Edward Gutierrez, 87, son of John Gutierrez and Clara Piroli Gutierrez, was born into love on June 21, 1931, in Aliquippa, PA, and left this world on August 31, 2018, surrounded by his loving family with his devoted wife, Mary (Huczko) Gutierrez, by his side. More than anything, he loved his daughters Terri Weeks (Curtis), Marcie Gutierrez (Bret Dickey), Lanie Farewik (Markus) and his seven grandchildren, Connor, Corinne and Camille Weeks, Elias and Samuel Dickey, and Jonathan and Oscar Farewik. He is also survived by his loving sister Anita D’Amico (Anthony), sister-in-law Mary Gutierrez Almonte, and was endeared by many nieces, nephews and cousins. He was preceded in death by his brother, Donald Gutierrez, and many dear friends. Raymond went to Aliquippa HS, where he participated in football and track, and later attended the Art Institute of Pittsburgh. He was an Army veteran of the Korean War, having served in France, and later served many years in the reserve special forces as a Green Beret. He proudly worked 35 years at J&L Steel mill and had his own sign painting business the duration of his adult life. Raymond was active, adventurous and civic-minded. He was an original member of the Beaver Valley Skydivers, performed on an acrobatic troupe, rock climbed, scaled a mountain in Ecuador, descended new passages in West Virginian caves, rafted white waters, skied, and taught Aliquippa firefighters to rappel. He served as the Grand Marshall for numerous Aliquippa parades. For 33 years he served as an advisor and judge for the Commercial Art & Design Department of the Beaver County Career Technology Center. For about 20 years, Raymond was a member of the Five Fun Ghouls, a charity band with a little musical talent and a lot of heart and humor which raised nearly 500 thousand dollars for local charities. He devoted countless hours during his life to providing creative entertainment to his children, grandchildren and neighborhood children. Raymond had a kind heart and lived life to its fullest. He traveled far and wide and high and low, had great respect for Mother Nature and the environment, and appreciated art, music, history, theater and foreign languages. He loved and was loved by many and will be dearly missed. In lieu of flowers, the family asks that donations be made in his name to B.F. Jones Memorial Library, 663 Franklin Avenue, Aliquippa, PA 15001. Friends will be received Monday from 3-7 pm in the Anthony Mastrofrancesco Funeral Home Inc. 2026 McMinn Street, Aliquippa 724-375-0496. A Mass of Christian burial will be held Tuesday at 1:00 pm in St. Frances Cabrini Roman Catholic Church with Father Martin Bartel, O.S.B. Officiating. Everyone is asked to meet in church. The Beaver County Special Unit will conduct military honors at 1:45 pm outside of St. Frances Cabrini Church. A parish vigil service will be held at 2:45 pm Monday in the funeral home

Raymond Edward Gutierrez, 87, son of John Gutierrez and Clara Piroli Gutierrez, was born into love on June 21, 1931, in Aliquippa, PA, and left this world on August 31, 2018, surrounded by his loving family with his devoted wife, Mary (Huczko)... View Obituary & Service Information

The family of Raymond Edward Gutierrez created this Life Tributes page to make it easy to share your memories.

Send flowers to the Gutierrez family.