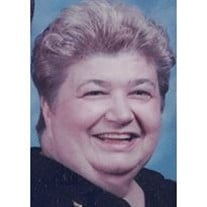 Patricia "Patti" (Lombardo) Legge, 76 of Center Twp. passed away peacefully surrounded by her loving family on October 9, 2016.She was born March 17, 1941 in Beaver Falls, PA and was the daughter of the late Joseph and Frances (Verner) Lombardo. Patti was also preceded in death by her step-mother: Mary D'Antonio Lombardo. Ten brothers and sisters: Dolly Byrne, Patrick Brizzi, Vincent Brizzi, Adam Tonio, Ed (Kay) Tonio, Joe (MaryJane) D'Antonio, Cecelia (Richard) Lucci, Sylvan(Theresa) D'Antonio,JoAnn Kristian,Patsy D'Antonio and a brother-in-law and sister-in-law: Gilbert and MaryAnn Tarquinio.Patti was a member of Saint Frances Cabrini Roman Catholic Church, Center Twp., where she served as a Eucharistic minister for Mass.She was the proud owner of the former Blooming Mill Flower and Gift Shoppe and most recently Lombardo's Italian Market. Her greatest enjoyment was cooking for her family.Patti is survived by her devoted husband of 57 years: Aldo Legge, Sr., A beloved son and daughter-in-law: Aldo and Sheila Legge, Jr. and a cherished grandson, Aldo Anthony, who could do nothing wrong in the eyes of his Nana. She is also survived by a brother,two sisters-in-law: Robert and Lena D'Antonio,Elaine D'Antonio,brother-in-law, Joseph "Sonny" Kristian and a sister-in-law and brother-in-law: Norma and Robert Morelli, along with numerous nieces and nephews. Visitation will be Wednesday from 4-8 p.m. in the Anthony Mastrofrancesco Funeral Home Inc. 2026 McMinn Street, Aliquippa 15001. Departing prayers will begin Thursday at 9:45 a.m. in the funeral home followed by a Mass of Christian burial at 10:30 a.m. in St. Frances Cabrini Church with Father Martin Bartel, O.S.B. officiating. Entombment will follow at Mt. Olivet Cemetery.A parish prayer service will be held at 3:45 p.m. in the funeral home on Wednesday.

Patricia "Patti" (Lombardo) Legge, 76 of Center Twp. passed away peacefully surrounded by her loving family on October 9, 2016.She was born March 17, 1941 in Beaver Falls, PA and was the daughter of the late Joseph and Frances (Verner) Lombardo.... View Obituary & Service Information

The family of Patricia "Patti" (Lombardo) Legge created this Life Tributes page to make it easy to share your memories.

Send flowers to the Legge family.