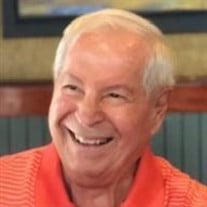 Dr. Nicholas Passodelis of Hopewell Township passed away peacefully on October 21, 2021. He was a loving husband to Andrea Sarris Passodelis and a devoted father to his two daughters; Barbara Hamill (Gerry) and grandsons Philip Hamill and Stephen Hamill of Bangor, Northern Ireland and Maria Giles (Gary) and granddaughters Nicole Giles and Rachael Giles of Bethlehem, PA. Growing up in Aliquippa, he was the youngest of eight children to the late William and Molly Spiradellis Passodelis. He is survived by his sister, Agnes Johnell of Panama City Beach, FL as well as many nieces and nephews. Nick attended Aliquippa High School where he lettered in football, basketball, baseball and wrestling and was inducted into the Aliquippa Sports Hall of Fame. His talent and skills earned him a scholarship to the University of Pittsburgh where he played football under Coach John Michelosen. Pitt was ranked 11th in 1955 and 12th in 1956, enabling Nick to play in the Gator Bowl and Sugar Bowl, an achievement he was immensely proud of. After graduating from the University Of Pittsburgh Dental School, Nick served in the U.S. Navy as a Lieutenant. When his service commitment ended, he practiced dentistry before returning to the University of Pittsburgh to specialize in orthodontics. Nick practiced as an orthodontist for over 40 years with offices in Wilkinsburg, Penn Hills, and Aliquippa. He was very proud of his practice and the patients he helped over so many years. An avid sportsman who enjoyed skiing, hunting, scuba diving, fishing and golf, Nick was a long-time member of Edgewood Country Club. His sporting interests took him on many adventures and he travelled extensively. Wherever Nick went, he always came home with a new friend and great stories. Nick was a devoted husband, father, and grandfather. He always placed high value in his faith and family. Those who had the opportunity to meet him were blessed to share time with him, hear his stories and just enjoy his larger-than-life personality. His family and friends will dearly miss Nick, Dad, Papou or as he was fondly known, Doc. Friends and family will be received at the Anthony Mastrofrancesco Funeral Home, 2026 McMinn Street, Aliquippa, PA on Wednesday, October 27, 2021 from 3:00 PM until 7:00 PM. A Trisagion Service will be held at 6:00 PM. Additional visitation will be held on Thursday, October 28, 2021 from 10:00 AM until the time of funeral services at 11:00 AM at the Kimisis Tis Theotokou Greek Orthodox Church where Father Yanni Verginis will officiate the service. Following the service, Interment will take place at Woodlawn Cemetery, Aliquippa. In lieu of flowers, donations can be made to the charity of your choice or the Greek Orthodox Church, 2111 Davidson Street, Aliquippa, PA 15001.

Dr. Nicholas Passodelis of Hopewell Township passed away peacefully on October 21, 2021. He was a loving husband to Andrea Sarris Passodelis and a devoted father to his two daughters; Barbara Hamill (Gerry) and grandsons Philip Hamill and Stephen... View Obituary & Service Information

The family of Dr. Nicholas Passodelis created this Life Tributes page to make it easy to share your memories.

Send flowers to the Passodelis family.