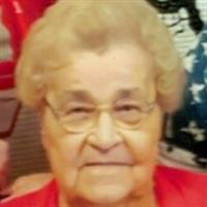 Heaven just received a beautiful soul…Mary E. (Jasek) Katus, 89 formerly of Hopewell Twp. passed away peacefully on April 7, 2018 while residing at Country Meadows, South Hills. She was born November 6, 1928 in West Aliquippa and was the daughter of the late Cyprian and Sophie (Olack) Jasek. In addition to her parents she was preceded in death by her beloved husband Edward James Katus and their son James Edward Katus. Mary was a member of Saint Titus Roman Catholic Church and the Confraternity of Christian Mothers, Aliquippa. She was a devoted member of the Hopewell Twp. VFW, Ladies Auxiliary Post #8805 where she served as past president and was also past president of district # 25. Mary enjoyed praying the rosary. She had a passion for baking cookies, bread, homemade noodles and pierogies. Her greatest joy was her family whom she cherished. Mary will be remembered with love by her children who survive her: Donna and William Pencosky, Patricia and Thomas Wuenschel, and Carol and Raymond Parise. Nine grandchildren: Christine and John, Melissa and Shane, April, Angel, Tim and Cristi, Steve, Matt and Sara, Stephanie and Becca. Four great grandchildren: Eddie, Noah, Ada Grace and John who she was lovingly referred to as “GG”. A brother and sister-in-law: John and Shirley Jasek, Four sisters: Helen Pruszenski, Sophie Laurito, Olga Fitzgerald, Betty Hopkins and numerous nieces and nephews. In lieu of flowers donations may be made in memory of Mary to the American Kidney Foundation. Visitation will be Tuesday from 2-4 & 6-8 pm in the Anthony Mastrofrancesco Funeral Home Inc. 2026 McMinn Street, Aliquippa (724)375-0496. Departing prayers will begin Wednesday at 9:45 am in the funeral home followed by a Mass of Christian burial at 10:30 am in St. Titus Church. Interment will follow at Mt. Olivet Cemetery. The Confraternity of Christian Mothers will recite the rosary at 1:30 pm in the funeral home. At 7:00 pm V.F.W. Post # 8805 will have at service in the funeral home.

The family of Mary E. (Jasek) Katus created this Life Tributes page to make it easy to share your memories.

Send flowers to the Katus family.