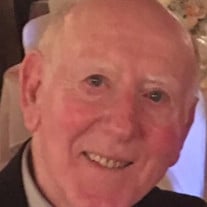 John “Jaggers” Ross, 85 of Hopewell Twp. passed away June 1, 2019 two days before his 86th birthday. His loving family was by his side as he left this world and went into the arms of Jesus. He was born June 3, 1933 in Washington, PA and was the son of the late John A. and Margaret (Marlow) Ross. In addition to his parents he was preceded in death by two brothers: Charles J. and Richard “Butch” Ross, and a sister Dorothy Joann Thomas. Jaggers was a member of St. Titus Roman Catholic Church, Aliquippa. He honorably served our country during the Korean Conflict in the U.S. Army. Jaggers graduated from Aliquippa High School and went to Carpentry School. After graduation he worked at J&L Steelworks in the Carpenter Shop and Blooming Mill until his retirement. He was an avid sports fan and was dedicated attending his grandsons’ hockey games. In earlier years he coached Hopewell Youth baseball. Surviving is the family he cherished: Beloved wife of 63 years, Deanna (Brooks) Ross. Daughter and son-in-law, Doreen and Ken Wormald, Son and daughter-in-law Michael and Kimberly (Shannon) Ross. Six grandchildren and two great grandchildren who he adored: Jessica and Brian Horvath, Brittany and her fiancée R.J. Stout, Sean and Cassie Wormald, Luke and Kelly Ross, Katie Ross and Nathan Wormald, great grandchildren: Colton and Lily. He is also survived by four sisters-in-law and a brother-in-law: Shirley Ross, Mary Grable, Robert and Betty Brooks and Theresa Trotta along with numerous nieces and nephews. Visitation will be Monday from 3-7 pm in the Anthony Mastrofrancesco Funeral Home Inc. 2026 McMinn Street, Aliquippa, 15001 724-375-0496. Departing prayers will begin at 11:00 am Tuesday in the funeral home followed by a Mass of Christian burial at 11:30 in St. Titus Church with Fr. Paul Householder. Entombment will follow at Mt. Olivet Cemetery. The Beaver County Special Unit will conduct military honors at the cemetery. The Ross Family would like to thank Mother Teresa Hospice for the compassionate care that was extended to Jaggers. In lieu of flowers, donations may be made to St. Jude Children’s Hospital, 501 St. Jude Place Memphis, TN 38105

The family of John "Jaggers" Ross created this Life Tributes page to make it easy to share your memories.

Send flowers to the Ross family.