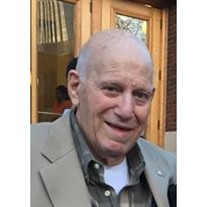 John William Gilson, affectionately known by family and friends as ?Jack?, passed away peacefully in his sleep at his home, surrounded by his family. Jack was the eldest child of John Baptiste Gilson and Rose Bober Gilson, born in Francis Mine, PA and raised in Burgettstown, PA. Jack joined the Army following graduation from Burgettstown High School at the age of 17 and served 25 years in uniform, retiring in the rank of Senior Master Sergeant. While in the Army, Jack served our country in combat in Korea and in Vietnam, having also had tours in Japan, France, Germany and numerous stateside locations.Jack married the former Elizabeth A. ?Betty? Wall of St. Clair, MO in 1957 and was a devoted Husband, Father, Grandfather, and Great Grandfather raising three children and enjoying 11 grandchildren, and 4 great grandchildren all of whom he took great interest and pride in. Jack held various positions following his retirement from the Army in 1974, culminating in the position of Business Operations manager and Human Resources Director for Capri Glass, retiring in 1995. In his retired years, Jack and Betty traveled to visit their children and grandchildren, and he generously volunteered his time with the local chapter of Consumer Protection where he helped senior citizens with their taxes and other financial matters.Jack greatly enjoyed spending time with his family and his grandchildren and great-grandchildren whom he loved dearly. He is preceded in death by his parents, two brothers Robert and Ronald, a sister Audrey (Brown), and his granddaughter Bailey Gilson. He is survived by his beloved wife, ?Betty? of Center Twp., as well as son Patrick and his wife Susan (Panfil) of Round Rock TX, daughter Michelle Balog and her husband Jason of Center Twp., son Scott and his wife Cathleen (Bright) of Colorado Springs, CO, as well as grandchildren Trystyn McCarthy, Jared Seaman, Kaitlyn Seaman, Maggie Gilson, Libbi Gilson, Lacey Gilson, Brandi Bowen, Sarah Gilson, Rachel Gilson and Benjamin Gilson. He is also survived by his great grandchildren Madisyn McLeod, Barrett (Jack) Bowen and the two newest additions to the family, Quinn Seaman and James McCarthy.Visitation will be Monday, July 27th from 2-8 p.m. in the Anthony Mastrofrancesco Funeral Home, 2026 McMinn Street, Aliquippa, PA 15001 (724) 375-0496. Departing prayers will begin at 9:15 a.m. Tuesday in the funeral home followed by a Mass of Christian burial at 10:00 a.m. in Saint Frances Cabrini Church, with Father Martin Bartel, O.S.B. officiating. Interment will follow at the National Cemetery of the Alleghenies, Cecil, PA . The SHVHG will conduct military honors at the cemetery. A parish vigil service will be held at 1:45 p.m. in the funeral home on Monday.In lieu of flowers, our family graciously asks for your donations to the Wounded Warrior Project, in honor of Jack?s military service to our great Nation. Donations can be made at the following: https://support.woundedwarriorproject.org.

John William Gilson, affectionately known by family and friends as ?Jack?, passed away peacefully in his sleep at his home, surrounded by his family. Jack was the eldest child of John Baptiste Gilson and Rose Bober Gilson, born in Francis Mine,... View Obituary & Service Information

The family of John William Gilson created this Life Tributes page to make it easy to share your memories.

Send flowers to the Gilson family.