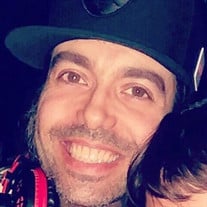 Jesse David Flati, 40 Pittsburgh, passed away unexpectedly on October 26, 2018. He was born May 11, 1978 in Sewickley and is the son of Roberta Flati and the late David A. Flati. Jesse was also preceded in death by his grandparents, Robert and MaryAnn (Mattia) Grossi, Henry Flati and Armenia (Casoli) Suder and Pete Suder. Jesse was a graduate of Quigley Catholic High School and LaRoche College, where he met his wife, Stephanie. He earned his master’s degree at Philadelphia University. Jesse was a free-lance graphic designer and custom framer. He and his wife formed their band, The Lopez, in Philadelphia and continued to play and tour the US after they moved back to Pittsburgh. They DJ’d often locally and loved all things music. Jesse treasured his family, his friends, his five cats, and all animals. He had a deep and extensive knowledge of music, records, comics, and film. Jesse was never afraid to speak out against injustice and bring truth to light. He was the best, most loyal friend you could ever, ever ask for, and will be very sorely missed. He is survived by his wife and best friend: Stephanie Flati, his loving mother, Roberta Flati, a treasured sister, Jamie Flati, his mother-in-law and father-in-law: Regis and Janice Welsh, Jr. Two sisters-in-law: Wendy Welsh (Jarrod Weeks) and Joze Welsh, a brother-in-law Regis (Rachel) Welsh III. Two nieces Sara and Mallory and two nephews Regis IV and Josiah. Jesse is also survived by his aunts and uncles: Cydney Doyle, Barbara and Richard Maccani, Paul Flati, Carla Flati, numerous cousins, and his five cats: Ralphus, Sam, Missy, Bernie, and Eclipse. Visitation will be Monday from 4-8 pm in the Anthony Mastrofrancesco Funeral Home Inc. 2026 McMinn Street, Aliquippa, PA 15001 724-375-0496 A service will be held at the funeral home, Tuesday at 10:00 am. Jesse loved his cats therefore, In lieu of flowers, a donation in Jesse's memory to an animal welfare organization would be appreciated.

Jesse David Flati, 40 Pittsburgh, passed away unexpectedly on October 26, 2018. He was born May 11, 1978 in Sewickley and is the son of Roberta Flati and the late David A. Flati. Jesse was also preceded in death by his grandparents, Robert and... View Obituary & Service Information

The family of Jesse David Flati created this Life Tributes page to make it easy to share your memories.

Send flowers to the Flati family.