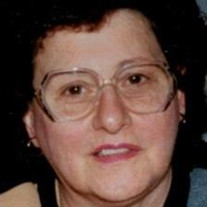 Elaine Marie D’Antonio, 94 a lifelong resident of West Aliquippa passed away November 30, 2017. She was born February 20, 1923 in West Aliquippa and was the daughter of the late Marco and Virginia Rubino. Elaine was a member of Saint Titus Roman Catholic Church where she was a dedicated volunteer in the church kitchen helping to cook many wonderful meals for various church functions. She also belonged to the Confraternity of Christian Mother’s and Saint Anthony Congregation. Elaine retired from the former Food City grocery store as a head cashier.She was a loving mother, grandmother and great grandmother and enjoyed being with her family. In addition to her parents, her beloved husband Patsy D’Antonio preceded her in death September 1, 2016. She was also preceded in death by a brother and sister-in-law: Guy and Mary Rubino, a sister, Lillian D’Antonio, a brothers and sisters-in-law, Frank Antonucci, Sylvan and Theresa D’Antonio, Adam Tonio, Eddie and Kay Tonio, Joe and Mary Jane D’Antonio, Cecelia and Dick Lucci, JoAnn Kristian, Patti Lou Legge and a very special cousin James D’Antonio. Elaine is survived by two daughters and sons-in-law: Patricia and Calvin Lind, Clinton, PA and Denise and Dwight Daudet, Maryland. Four cherished grandchildren: Craig, Mark and Mathew Lind. Valerie Russell and her husband Tim. Three great grandchildren, Maggie, Travis and Lainie Russell. Elaine is also survived by a sister, Dorothy Antonucci, brothers and sister-in-law: Emilio D’Antonio, Joe Kristian, Aldo Legge, and Robert and Lena D’Antonio and many devoted nieces, nephews and special friends. Visitation will be Sunday from 4-8 pm in the Anthony Mastrofrancesco Funeral Home Inc. 2026 McMinn Street, Aliquippa 724-375-0496. Departing prayers will begin at 9:30 am in the funeral home followed by a Mass of Christian burial at 10:00 am in St. Titus Church with her nephew Monsignor David Rubino officiating the Mass. Entombment will follow at Mt. Olivet Cemetery.

Elaine Marie D&#8217;Antonio, 94 a lifelong resident of West Aliquippa passed away November 30, 2017. She was born February 20, 1923 in West Aliquippa and was the daughter of the late Marco and Virginia Rubino. Elaine was a member of Saint Titus... View Obituary & Service Information

The family of Elaine Marie D'Antonio created this Life Tributes page to make it easy to share your memories.

Send flowers to the D'Antonio family.