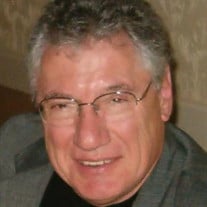 Dr. John A. Ross, 82, of Aliquippa passed away peacefully on January 16, 2022 surrounded by his family. Born September 5, 1939 in Aliquippa, he was the son of the late Joseph and Nellie (Stala) Ross. In addition to his parents, he was preceded in death by his brothers Joseph Ross, Jr. and Pasqual (Patsy) Ross, and sisters-in-law Barbara (Collier) Ross and Rosemarie (Kotlarz) Ross. John was a longtime member of St. Titus Catholic Church in Aliquippa, and Our Lady of Fatima Catholic Church in Hopewell. From a young age John was a talented athlete, playing baseball and football from youth league through high school. He graduated from Aliquippa High in 1958 and was awarded a baseball scholarship from the University of Pittsburgh. After one year of college, John enlisted in the US Army and was stationed in Germany for three years. Upon return to Aliquippa he met the love of his life, Frances Barletta, whom he married in 1964. During the early years of his marriage, John completed his Bachelor’s degree in Education from Slippery Rock University and eventually earned his PhD from the University of Pittsburgh. As a career educator, he positively impacted the lives of many young people, teaching students Civics at Hopewell High School and ultimately serving as Superintendent of New Brighton Area School District for many years before his retirement. John was an avid sports fan, never missing Steelers and Pitt football games. John also loved watching and playing golf, whether taking annual golf trips with son-in-law David, or playing at local area golf courses. He passed down his passion for sports through teaching and mentoring his children and grandchildren. John also influenced the whole family with his love of sci fi shows, spy novels, and music, as a long-time subscriber to the Pittsburgh Symphony. In his retirement years, John enjoyed spending time with his wife in Naples, FL, as well as traveling far and wide to visit his children wherever they lived. John was a true family man, devoting his days to caring for all of his grandchildren who loved him dearly. Family cookouts on the patio and sharing ice cream sundaes with him will be greatly missed. In addition to his beloved wife, he is survived by his four children: Annette (David) Metzger, Christopher (Deborah) Ross, Angela (William) Tzilkowski, and Gina (James) Durkin; and nine grandchildren: Stephanie and Melissa Metzger, Krista, Kara, and Owen Ross, Luke and Rosalie Tzilkowski, and Riley and Jacob Durkin. John is also survived by a brother Dominic Ross, and sister-in-law June (Collier) Ross, and numerous cousins, nieces, and nephews. Private services were held on Wednesday, January 19, 2022 at Anthony Mastrofrancesco Funeral Home, 2026 McMinn Street, Aliquippa, PA 15001. John was laid to rest at Mt. Olivet Cemetery. In remembrance of John’s life, the family requests that any charitable donations be made to the Parkinson’s Foundation (www.parkinson.org). The family would like to extend their heartfelt thanks to the staffs at Concordia at Villa St. Joseph Nursing and Personal Care Homes who provided compassionate care to John over the past year.

Dr. John A. Ross, 82, of Aliquippa passed away peacefully on January 16, 2022 surrounded by his family. Born September 5, 1939 in Aliquippa, he was the son of the late Joseph and Nellie (Stala) Ross. In addition to his parents, he was preceded... View Obituary & Service Information

The family of Dr. John Ross created this Life Tributes page to make it easy to share your memories.

Send flowers to the Ross family.