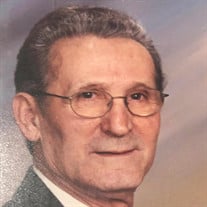 Domenico Fratangeli, 90, passed away on April 20, 2021 with his loving family by his side. He was born on October 16, 1930 in Frosinone, Italy, and was the son of Benedetto and Paolina (Dore) Fratangeli. In addition to his parents, he was preceded in death by five brothers and sisters-in-law: Augusto Fratangeli, Mario and Giulia Fratangeli, Umberto and Rina Fratangeli, and Frank Fratangeli. A son-in-law, Robert Rager, and a brother-in-law, Saverio Antonucci. Domenico immigrated to Aliquippa from Italy, determined to give his family a better life. In addition to being a master brick and concrete mason, he spent 21 years employed by the maintenance department at the Aliquippa School District. He always found the will to sing, hum, or carry a tune, even in the face of unbearable pain. He was a devoted member of St. Titus Roman Catholic Church and served in the Italian Army. His cement skills will forever be unmatched. Domenico is survived by beloved wife of 70 years, Felicetta (Ceccarelli) Fratangeli. Two daughters: Vincenzina “Vinnie” (Alessandro) Sardilli, and Assunta “Sue” Rager. Four grandchildren: Sonia Joseph (Paul Mann), Tonia Anderson, Mandy (Geoff) Crawford and Ashley (Michael) Trautman. 9 great-grandchildren: Christopher Joseph, Alessandra Mann, Dominik Anderson, Cailin, Cora, Cayleigh, Chloe Crawford, Celia and Oren Trautman. A sister: Filomena Antonucci. Four brothers and six sisters-in-law: Remo and Maria Fratangeli, John and Vicki Fratangeli, Tony and Anna Fratangeli, Phillip and Sue Fratangeli, Margherita Fratangeli, Antoinette Fratangeli. He is also survived by many loving nieces and nephews, and Commare Cristina Fronzaglia Murray, Sandra Fronzaglia, and Compare Tony DiGiandomenico. The family would like to thank the caring team of Good Samaritan Hospice for helping ease Domenico into peace. Visitation will be held Thursday from 4-7 pm in the ANTHONY MASTROFRANCESCO FUNERAL HOME INC. 2026 McMinn Street Aliquippa PA 15001 724-375-0496. Departing prayers will begin at 9:30am in the funeral home followed by Mass of Christian Burial at 10am in the St. Titus Roman Catholic Church. Entombment will follow at Mt. Olivet Cemetery.

Domenico Fratangeli, 90, passed away on April 20, 2021 with his loving family by his side. He was born on October 16, 1930 in Frosinone, Italy, and was the son of Benedetto and Paolina (Dore) Fratangeli. In addition to his parents, he was preceded... View Obituary & Service Information

The family of Domenico Fratangeli created this Life Tributes page to make it easy to share your memories.

Send flowers to the Fratangeli family.