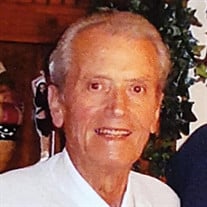 With heavy hearts we say goodbye to our beloved husband, father, and grandfather. After a lengthy illness, Dario Tomei, 83, of Aliquippa died peacefully on Wednesday, February 22,2017 with his two loving daughters by his side. The son of Maria Cappella Tomei and Giuseppe Tomei, he was born on February 20, 1934 in Supino, Italy. Preceded in death by his mother, father and sister, Clelia; Dario was the sole survivor of a tragic explosion in Supino in 1942 that took his family.He immigrated to the United States to live with his uncle, the late Guy Cappella of Aliquippa, whom he loved like a father. Dario was a meat cutter by trade, starting his career at the former C&L Supermarket, retiring as the manager of the meat department at Viola’s in Cranberry Twp., and then after retirement working the deli counter at Beaver County Fruit Market in Center Twp. His passion for life, his strength and his generosity will be fondly remembered by all who knew him. His smile touched everyone he met. He enjoyed landscaping, gardening, and cooking; all of which he did with great love; his meatballs and sauce will be missed. He loved his family most of all.His legacy of love will remain with all who survive him, his best friend and wife, Pia Leone Tomei; his two loving daughters, Marie Guarascio and Michelle Tomei; a son-law-law whom he loved like a son, Daniel Guarascio; and his three beautiful grandchildren who were adored by their Pap Pap, Michael, Danielle, and Anthony Guarascio; all of Center Twp.; as well as his cousins, friends, and all those whose lives he touched.A special thank you to the nurses and staff at Heritage Hospice, his caring neighbors, and to Donna Nabel and Lissa Spak, for becoming a part of our family and helping us care for our father and treating him with the love and affection that you would have extended to your own.Visitation will be Friday from 3 to 7 p.m. at the Anthony Mastrofrancesco Funeral Home Inc., 2026 McMinn St., Aliquippa, 724-375-0496. Departing prayers will start at 8:45 a.m. on Saturday at the funeral home, followed by a Mass of Christian burial at 9:30 a.m. at St. Francis Cabrini Roman Catholic Church with Father Martin Bartel, O.S.B. officiating. Interment will follow at Mt. Olivet Cemetery. A parish vigil service will be held at 2:45 in the funeral home.

With heavy hearts we say goodbye to our beloved husband, father, and grandfather. After a lengthy illness, Dario Tomei, 83, of Aliquippa died peacefully on Wednesday, February 22,2017 with his two loving daughters by his side. The son of Maria... View Obituary & Service Information

The family of Dario Tomei created this Life Tributes page to make it easy to share your memories.

With heavy hearts we say goodbye to our beloved husband, father,...

Send flowers to the Tomei family.