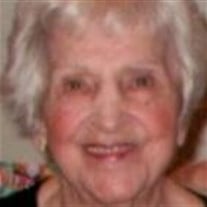 Clara Ann Statti, 105, of Orange Park, Florida, formerly of Aliquippa, went home to be with the Lord on Thursday, November 23, 2017, after a long, beautiful life. She was born December 27, 1911, in Steubenville, Ohio, and was the daughter of the late Louis and Marietta (Cafrelli) Rossi. In addition to her parents, she was preceded in death by her husband, Dr. Harry Statti; son, Lawrence Statti; brother, Adam Ross; and a special daughter-in-law, Lorraine Statti. Mrs. Statti faithfully went to church in Florida. She remained a member of Saint Titus Catholic Church and was the oldest member of the congregation. She also belonged to the Confraternity of Christian Mothers. Mrs. Statti retired as a nurse; she did private nursing for families and worked at Aliquippa Hospital. She will be remembered as a loving person who was always willing to help people. Mrs. Statti took great pleasure cooking and baking for her family and friends and enjoyed when they all were together. She is survived by her three sons and their spouses, Harry Statti, with whom she resided in Florida;  Robert and Louise Statti, Chippewa; and Dr. Charles and Pamela Statti, Florida; a daughter-in-law, Doris Statti; seven grandchildren, Jeff, Scott, Phillip, Andrea, Samantha, Adam, and Casey; ten great-grandchildren, Ashley, Sara, Jimmy, Jenna, Jackson, Molly, Henry, Oliver, Luca and Hudson; and three great-great-grandchildren, Damon, Zoey and Liam. She is also survived by numerous nieces and nephews. Visitation will be Wednesday from 4 to 8 p.m. in the ANTHONY MASTROFRANCESCO FUNERAL HOME INC., 21st and McMinn Streets, Aliquippa, 724-375-0496. Departing prayers will begin at 9:30 a.m. Thursday in the funeral home followed by a Mass of Christian burial at 10 a.m. at St. Titus Church with Father Tom Wilson officiating. Entombment will follow at Sylvania Hills Memorial Park.

Clara Ann Statti, 105, of Orange Park, Florida, formerly of Aliquippa, went home to be with the Lord on Thursday, November 23, 2017, after a long, beautiful life. She was born December 27, 1911, in Steubenville, Ohio, and was the daughter of... View Obituary & Service Information

The family of Clara Ann Statti created this Life Tributes page to make it easy to share your memories.

Send flowers to the Statti family.