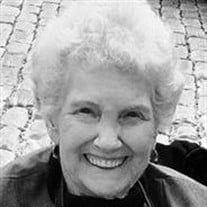 Charlotte C. Somerville, 88 of Center Township passed away on January 18, 2018 She was born November 22, 1929 in Indiana County and was the daughter of the late Charles and Louise Eales. In addition to her parents she was preceded in death by her beloved husband George T. Somerville, a sister, Jeanne Wolfe and a brother, Tommy Eales. She was a member of Saint Frances Cabrini Roman Catholic Church, Center Twp. and the 50 plus club at the church. Charlotte was a member of various political and volunteer organizations throughout the county. She was most proud serving as Campaign Manager for “Ed Rendell for Governor” and was the Financial Secretary & Fundraiser for Congressman Atkinson. Charlotte was also a former member of Center Township Planning Commission. She started her career in banking and retired from National City Bank as a manager. Charlotte is survived by five children and their spouses: Wayne Karl Somerville, Christine and Dennis Mihoces, Gail and Kurt Ulrich, Lynn and Kim Rainey and Kelly and Tony Nagy. She was blessed with nine grandchildren who Charlotte enjoyed spending time with. Max Somerville, Bruce and Rachael Fleming, Matt Ulrich, Jonathon and Jasmin Nagy, Drew Meeker, Ben Karl Somerville, Neal Ulrich, Hunter Nagy, Cole Meeker and a great granddaughter, Jade Nagy. Charlotte is also survived by three sisters and two brothers-in-law: Patty and Richard Mara, Shirley and Robert Gallagher, Bonnie Landers and numerous nieces and nephews. Visitation will be Monday from 4-8 pm in the Anthony Mastrofrancesco Funeral Home Inc. 2026 McMinn Street, Aliquippa 724-375-0496. Family and friends will meet at St. Frances Cabrini Church, Tuesday at 10:00 a.m. for a Mass of Christian burial with Father Martin Bartel, O.S.B. officiating. Private Interment will follow at Sylvania Hills Memorial Park. The Somerville family would like to thank the staff at Mother Teresa Hospice who took care of their mother. Your kindness and compassion will always be remembered.

Charlotte C. Somerville, 88 of Center Township passed away on January 18, 2018 She was born November 22, 1929 in Indiana County and was the daughter of the late Charles and Louise Eales. In addition to her parents she was preceded in death by... View Obituary & Service Information

The family of Charlotte C. Somerville created this Life Tributes page to make it easy to share your memories.

Charlotte C. Somerville, 88 of Center Township passed away on...

Send flowers to the Somerville family.