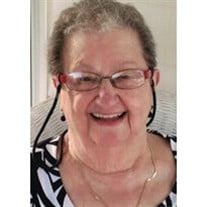 Catherine "Kay" (Parisi) Ketchel, 93 of Hopewell twp. passed away Monday, April 11, 2016 at her home after a short illness.Born May 7, 1922 Kay was the daughter of the late Antonio and Alice Parisi. In addition to her parents she was preceded in death by her husband of 55 years, Joseph F. Ketchel, two brothers: Mike and Ernest Parisi. Kay was a 1942 graduate of Aliquippa High School. She was a member of Saint Titus Roman Catholic Church and the Confraternity of Christian Mothers. Kay also served as the former president of the Circle of Friends, Baden. She was a self- employed beautician and proudly opened her own beauty salon in Aliquippa and subsequently worked at Stangl's Bakery, Joseph Horne Co., and J.C. Penny's. In her retirement years Kay enjoyed playing computer games, senior citizens trips and casino gambling.She is survived by her two sons and daughters-in-law: Joseph and Jane Ketchel, Hopewell Twp., Mark and Cathy Ketchel, Gibsonia, daughter and son-in-law: Toni and Jack Fontana, Houston, TX. Three grandsons: Zachary Ketchel, Alex and Nick Fontana. A dear sister and brother-in-law: Rosie and Tony Piocquidio, Hopewell Twp. and numerous nieces, nephews and cousins.Visitation will be Thursday from 2-4 & 6-8 p.m. in the Anthony Mastrofranceco Funeral Home Inc. 2026 McMinn Street, Aliquippa 724-375-0496. Departing prayers will begin at 9:00 a.m. Friday in the funeral home followed by a Mass of Christian burial at 9:30 a.m. in St. Titus Church. Interment will follow at Mt. Olivet Cemetery. In lieu of flowers donations may be made, if desired, to the American Heart Association , 444 Liberty Avenue, Suite 300, Pittsburgh, PA 15222 in memory of Kay.Kay?s smile and kindness will be sadly missed by her family and all who loved her.

Catherine "Kay" (Parisi) Ketchel, 93 of Hopewell twp. passed away Monday, April 11, 2016 at her home after a short illness.Born May 7, 1922 Kay was the daughter of the late Antonio and Alice Parisi. In addition to her parents she was preceded... View Obituary & Service Information

The family of Catherine "Kay" Parisi Ketchel created this Life Tributes page to make it easy to share your memories.

Send flowers to the Ketchel family.