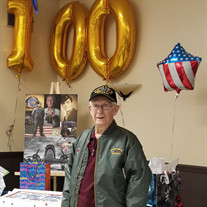 Anthony “Tony” Sercel, 101, of Center Twp. passed away peacefully on November 26, 2019 at Good Samaritan Hospice Beaver, surrounded by his family. He was born December 17, 1917 and was the son of the late John and Ursula Sercel of West Aliquippa. Tony proudly served with the US Army’s 82 Airborne Division (504th Regiment,3rd Battalion, I Company) in Europe during WWII. He made 27 parachute jumps in training and combat. He served as Squad leader and earned his Sergeant Stripes on the battlefield carrying his wounded Lieutenant to safety. He retired from the Jones & Laughlin Steel Corporation where he worked in the Tin Mill. Tony was a member of St. Frances Cabrini Church, SNPJ, GCU DAV Chapter #107 and his favorite place Center Twp. VFW Post 1821, where he served in numerous positions. Preceding Tony in death, in addition to his parents, was his beloved wife Mary (Pudik) Sercel, a grandson Kurt Dyrwal, his sister Mary Kalitz, and a brother Vincent Sercel. Tony is survived by his daughters: Marilyn and Michael Dyrwal and Nancy and Richard Fiacco, a son Tony Gilbert, grandchildren Amy and Thomas Gilbert, a sister Ann Brown, a nephew Michael, who was also Tony’s favorite hunting buddy, many additional nephews, nieces and his extended family ,the Brobeck’s and Brown’s. Visitation will be Friday in the Anthony Mastrofrancesco Funeral Home Inc. 2026 McMinn Street, Aliquippa, 15001 724-375-0496 from 10:30 am until time of blessing service at 11:30 am with Father Martin Bartel, OSB. Interment will follow at Woodlawn Cemetery. The Beaver County Special Unit will provide military honors at the cemetery. The family would like to thank his wonderful caregivers, Denise, Peggy, Kim, the social workers, nurses and entire staff at Good Samaritan Hospice, Beaver for the compassionate care. In lieu of flowers donations may be made in memory of Tony to DAV Chapter 107, 141 Rosewood Drive, Aliquippa, PA 15001 or the Beaver County Humane Society 3394 Brodhead Road, Aliquippa, PA 15001.

The family of Anthony "Tony" Sercel created this Life Tributes page to make it easy to share your memories.

Send flowers to the Sercel family.