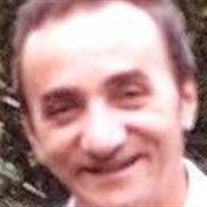 Anthony Michael Casciato, Sr. “Shrimpy”, 81 of Aliquippa passed away unexpectedly on March 3, 2017. He was born September 4, 1935 in West Aliquippa a son of the late Frank and Stella D’Ambrosio (Ambrose) Casciato, Sr. Anthony was a member of St. Titus Roman Catholic Church, Aliquippa, the Saint Anthony Congregation and Panther Athletic Club both of West Aliquippa. He was a retired employee of J&L Steelworks where he worked in the blast furnace and he also retired from Vincent Metal Goods, Ambridge. Anthony was a veteran of the United States Marine Corp where he served as a Corporal during the Korean Conflict. He took great pride in nurturing a large garden with plenty of vegetables that he would graciously share. Anthony was also very meticulous about his yard working hard to make sure it looked nice. In his spare time he found enjoyment in bowling. He was very talented with the accordion and had been playing the instrument since he was 13 years old. Anthony is survived by his wife of 34 years, Alice Casciato, his three children: Barbara & Rudy Tomazich and Theresa Casciato, all of Pittsburgh, Anthony Jr., and April Casciato, Waukesha,WI a dear sister: Cil Casciato, Aliquippa, Four grandchildren: Elizabeth, Christopher, Cicely and Vincent and a great granddaughter: Ariel Stella. Step-children: Mike and Nancy Cunningham, Randy and Debbie Ruff, all of Monaca, William Snedden, Aliquippa Robert Snedden, Greenfield, WI, Anthony and Debbie Peterson, Arab, AL, Richard and Jane Sneeden, Aliquippa and George and family. Two nieces: Diane and Joyce and many loving cousins. Visitation will be Monday 2-4 & 6-8 p.m. in the Anthony Mastrofrancesco Funeral Home 2026 McMinn Street, Aliquippa 15001 724-375-0496. Departing prayers will begin Tuesday at 9:30 a.m. in the funeral home followed by a Mass of Christian burial at 10:00 a.m. in St. Titus Church with Father Howard Campbell Officiating. Entombment will follow at Mt. Olivet Cemetery. The Beaver County Special Unit will conduct military honors at the cemetery.

The family of Anthony Michael Casciato Sr. created this Life Tributes page to make it easy to share your memories.

Send flowers to the Casciato family.