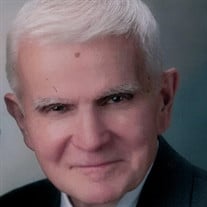 Andrew “Fats” Grago, 96 of Aliquippa is now at peace. He passed away Friday, September 28, 2018. He was born January 11, 1922 in Aliquippa and was the son of the late George and Mary Grago. In addition to his parents he was preceded in death by his beloved wife Lucy (Caratini) Grago who passed away January 9, 2018. Andrew was also preceded in death by four siblings: John, Irene, Elizabeth and Mary. He was part of the greatest generation, a veteran of the U.S. Army, defending our country during World War II. His pride of serving our country stayed with him when he would watch WWII movies as a favorite pastime. Andrew retired from J&L Steelworks Welded Tube Department. He was a member of the Celtics Red Club, Aliquippa. Andrew enjoyed gardening and was very meticulous about it. A weed never stood a chance against him. He had a love of nature and being outside. Andrew also had a talent for woodworking and spent many hours making keepsakes. He also was a Steelers, Pirates and Penguins fan. He is survived by a son and daughter-in-law: Robert and Donna Grago, Leetsdale, two daughters and a son-in-law: Linda and Ed Stojan, Baden and Laura Grago, Aliquippa, who lovingly took care of her dad for two years. Andrew is also survived by six grandchildren: Michelle and Mike Dominick, Christine and Jon Douglas, Kelly Grago, Lindsay Stojan, Courtney Stojan and her boyfriend Luke Miller and Andrew Stojan. Two sisters, Ann and Leona and a dear sister-in-law, Eleanor Lolly, numerous nieces and nephews and a special dog Toto. The special care that Laura gave to her dad, as his care giver, was deeply appreciated by her sister and brother. Visitation will be Monday from 5-8 pm in the Anthony Mastrofrancesco Funeral Home Inc. 2026 McMinn Street, Aliquippa 724-375-0496. A service will be held in the funeral home Tuesday at 11:00 am with his nephew Rev. Dennis Ugoletti. Interment will follow at Sylvania Hills Memorial Park.

The family of Andrew "Fats" Grago created this Life Tributes page to make it easy to share your memories.

Send flowers to the Grago family.