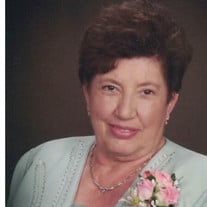 On October 3, 2020 Amelia (Battaglini-Ciccone) Fronzaglia, 81 of Aliquippa, passed away surrounded by the love of her family. Her strength and will are now served as she makes her way to be with God along with her beloved husband Alberto and sister Maria whom she has so dearly missed these last years. Born March 12, 1939 in Pacentro (L’aquila Abruzzo), Italy, Amelia was the daughter of a butcher (Antonio Battaglini) and homemaker (Maria Cristina Centofanti) and lost her parents at a very young age. Along with her loving sister Maria, she made her way on the boat Christopher Columbus to Ellis Island in 1959. She then settled in West Aliquippa with her adoptive parents David and Lucia Ciccone. After several years in the country, she met Alberto Fronzaglia also from Pacentro, Italy. A mutual cousin introduced them and in three short months, they were married. As the story goes, before Amelia was to leave for America and even knew of Alberto, many people came to her house to bid her farewell and luck for her voyage to a new land. Filomena Fronzaglia, had visited her house and asked her to take a big piece of cheese to her son Alberto and his brothers that were also in America. Amelia feeling the burden of this move had said she could not take the cheese as her trunk was packed, she had no idea where she was really going and did not want a piece of cheese in her trunk to stink things up. Years later, Alberto would write to Filomena about a beautiful young lady from Pacentro that he met in Aliquippa and he was set to marry her. Filomena’s response was “if she was not good enough to bring you cheese, she is not good enough to marry.” Alberto still decided to marry Amelia anyways and they celebrated 50 years of marriage on June 16th, 2012, one year before he passed. Together they had a wonderful life living in the same house they bought on McLean Street in Aliquippa before their marriage. There they raised their beloved and devoted daughters, Sandra Fronzaglia and Cristina Fronzaglia Murray in their Catholic faith and an unparalleled work ethic. It was a home that was open to all and the site of many dinners, holiday celebrations and family gatherings filled with laughter and stories to last a lifetime. Amelia had a love of cooking, her family, faith and also her garden. She enjoyed the many flowers you would see adorning her house as well as a fresh garden to make her special sauce. If love could be measured in loaves of Easter Bread, pounds of cavatelli, bowls of pasta, jars of sauce, pans of lasagna, boxes of cookies, dozens of meatballs, links of sausage, and pots of wedding soup, you knew she cared and gave in great abundance. Those talents in cooking were well served in her roles with the Aliquippa School District for 36 years working in the cafeteria and becoming known as the pizza lady as she was recognized by the children wherever she went in town and in working for over 40 years at Gino’s catering serving old- world Italian meals. Amelia was a member of St. Titus Roman Catholic Church, Aliquippa. She and Alberto worked to send their children to school there as well as Our Lady of the Sacred Heart, Coraopolis and then Duquesne and Gannon Universities continuing their Catholic faith. She was a devoted member of the St. Anthony Congregation of West Aliquippa and enjoyed the many events she catered with the women of the congregation to help raise funds in support of Saint Anthony. Aside from her husband, Amelia was preceded in death by her sister and brother-in-law, Vittorio and Maria DiGiandomenico, brother and sister-in-law, Alessandro and Rita Battaglini; and other Fronzaglia, Battaglini and Ciccone family members. She will be sorely missed by her caring daughters Sandra Fronzaglia, Center Township and Cristina and Christopher Murray, Grace Murray (granddaughter) Cleveland, Ohio; and her furry “granddog” Rooney, who she made special meatballs for on every visit. She leaves behind many devoted nephews and nieces especially those of the DiGiandomenico family who watched over her during these last weeks. As well as many good friends who over the years sat at her table and shared a meal, cup of coffee and cookie. The family would like to thank the nursing staff at Good Samaritan Hospice for the wonderful care that was extended to their mother those friends and family members who have called and stopped in to see her. Visitation will be Wednesday 5-8pm in the ANTHONY MASTROFRANCESCO FUNERAL HOME INC., 2026 McMinn Street Aliquippa PA 15001 725-375-0496. Departing prayers will begin Thursday at 9:30 am in the funeral home. A Mass of Christian Burial will be held at St. Titus Roman Catholic Church at 10:00 am. Interment will follow at Sylvania Hills Cemetery. Due to the restrictions of COVID-19, face masks are required while entering the facility and must be kept on throughout duration of visit. We ask to please refrain from hugging and to practice social distancing.

On October 3, 2020 Amelia (Battaglini-Ciccone) Fronzaglia, 81 of Aliquippa, passed away surrounded by the love of her family. Her strength and will are now served as she makes her way to be with God along with her beloved husband Alberto and... View Obituary & Service Information

The family of Amelia (Battaglini-Ciccone) Fronzaglia created this Life Tributes page to make it easy to share your memories.

Send flowers to the Fronzaglia family.