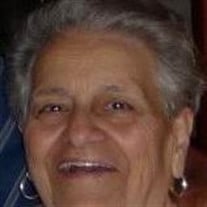 Alda M. Parone, 88 of Margate Florida, formerly of Aliquippa, died peacefully at Margate Manor on May 13, 2017, following an extended illness. She was born April 7, 1929, in Aliquippa and was the daughter of the late Alterio and Irma (Napolone) Marcantonio. In addition to her parents, she was preceded in death by her beloved husband, Gerard R. Parone, sisters: Melba Guzma, Ann Santolla, Ida Santolla and brother Lino Marcantonio. Alda was a member of St. Titus Roman Catholic Church and the Confraternity of Christian Mothers. She was active at the former Aliquippa Hospital in the woman’s auxiliary. She had a smile that was so warm and welcoming. Many may remember Alda from working at the election polls that were behind her house in her garage for several years. Her greatest joy was her family. Every Sunday Alda hosted dinner for her family to enjoy and spend time together. She was a loving mother and grandmother to her children and her grandchildren. Alda leaves behind to celebrate her life a son and daughter-in-law: Gerard J. and Colleen Parone, Ambridge, a daughter and son-in-law: Irma Parone and Wayne Fritzche, Coral Springs, Florida. Three grandsons: Tony and Madelyn Parone, Ohio, Arthur Parone, Brighton Twp. and Carl Fidurski, Atlanta Georgia. Alda was blessed with a great-grandson: Antonio Parone. She is also survived by many loving nieces, nephews, cousins, and friends. Visitation will be Sunday from 1-5 p.m. in the Anthony Mastrofrancesco Funeral Home Inc. 2026 McMinn Street, Aliquippa. 15001 724-375-0496. Departing prayers will begin Monday, 9:30 a.m. in the funeral home followed by a Mass of Christian Burial at 10:00 a.m. at St. Titus Church with Father Howard Campbell officiating. Interment will follow at Mt. Olivet Cemetery.

Alda M. Parone, 88 of Margate Florida, formerly of Aliquippa, died peacefully at Margate Manor on May 13, 2017, following an extended illness. She was born April 7, 1929, in Aliquippa and was the daughter of the late Alterio and Irma (Napolone)... View Obituary & Service Information

The family of Alda M. Parone created this Life Tributes page to make it easy to share your memories.

Send flowers to the Parone family.