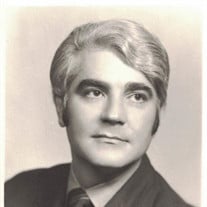 Albert Carl (Bato) Merulli, of Beaver passed away peacefully with his wife by his side on Saturday, June 2, 2018 He was the son of the late Andre Merulli and Anna Maria (Montanari) Merulli. In addition to his parents he was preceded in death by his step-father Joe “Jonk” Venetti. Five brothers; Roger, Robert, Cergel, Joseph and George, three sisters; Lillian, Eleanor, and Antoinette. Albert was a member of St. Cecilia Roman Catholic Church in Rochester. Albert enlisted in the US Army and served fifteen months active duty in the Korean War. After his discharge, Albert attended CCBC where he earned a degree in Criminal Justice. He began his thirty-year law enforcement as a patrolman then eventually became Chief of Police for twenty years in Aliquippa during the time when the steel mills were booming and there was a thriving business community. He recalled escorting several presidential candidates and had many stories to tell about his experiences. During his time in the police force he received numerous honors; Policeman of the Year, Silver Star Award, Humanitarian Fellowship Award and was inducted into the Police Hall of Fame. After retiring from police work, he went to work in the Beaver County Jail as a corrections officer and was promoted to Sergeant. Albert was elected to serve as Constable for Brighton Township and was also a member of the Western Pennsylvania Chief of Police Association. Albert loved working with and mentoring young people. He was fondly referred to as “Chief” even after his retirement. Albert has a passion for horses and enjoyed trail riding with his wife and daughter. He will be truly missed by his family and friends. He is survived by his wife Andrea Merulli, a daughter and son-in-law: Lisa and Mitchell Baker, a granddaughter, Ava-Li Baker, two sisters, Clarice Venetti and Josephine Winger along with numerous nieces and nephews. Visitation will be Tuesday from 2-4 & 6-8 pm. Departing prayers will begin at 9:15 am Wednesday in the funeral home followed by a Mass of Christian burial at 10:00 am in St. Cecelia Church. Entombment will follow at Mt. Olivet Cemetery. The Beaver County Special Unit will provide military honors at the cemetery.

Albert Carl (Bato) Merulli, of Beaver passed away peacefully with his wife by his side on Saturday, June 2, 2018 He was the son of the late Andre Merulli and Anna Maria (Montanari) Merulli. In addition to his parents he was preceded in death... View Obituary & Service Information

The family of Albert Carl. (Bato) Merulli created this Life Tributes page to make it easy to share your memories.

Send flowers to the Merulli family.